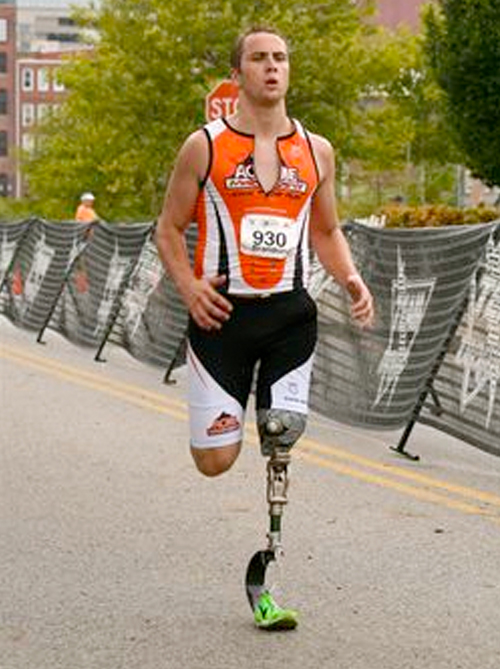 Best Event: There were two: competing in the Kansas Relays with the whole competitive atmosphere and running in the Rudolph 5K with six other amputees that were also helped through ABR less than one year after the organization started!

I was active in my youth, pursuing football and snowboarding as my most serious interests in high school, while enjoying many others including surfing. My life slowly started to change throughout the year of 2007. During the lead-up and occurrence of my junior season of football, I was plagued by what was thought to be a nagging injury, but upon this injury developing into a pain so intense that I could not walk, I realized it was more serious. In November of 2007, I was diagnosed with Stage 4 Ewing’s Sarcoma, and underwent nine months of chemotherapy. I also had a limb-salvage surgery that pushed the limits of reconstruction. Ultimately, in the following February, less than a year from the surgery, my knee replacement failed due to a recall. I underwent two attempts to fix my knee. These attempts failed, and I made the decision to have my left leg amputated above the knee on July 27th 2007, one year and one day after my last chemotherapy treatment. I am now, thankfully, more than three years in remission.

With the catharsis that was my amputation, I am now able to pursue the active lifestyle that I had been forced to give up. I play full-court basketball, and I also have returned to freestyle snowboarding where I am trying to further show what is possible by continuing to learn tricks and rotations that were previously not imagined for lower limb amputees. It was not until I came in contact with Ryan Fann and Aaron Fitzsimmons that I was exposed to running prostheses and the world of parathletics. I have started to train and compete in both track events and triathlons. This past summer was the first time I competed in any events. I competed in the Endeavor games and in my first 100m race ran a London B standard time. I completed my first triathlon later in the summer, Olympic Distance (1.5 km swim, 40 km bike, and 10km run), only after three weeks training. I did so in a time of 3 hours and 44 minutes qualifying me for the Paratriathlon National Championship in the end of May. In April of this year I was invited to and competed in the Kansas Relays paraathlete 100m and 200m races, and I ran London B standard times in both races. I look forward to continue by training and compete at the Endeavor Games thus year, as well as in the US Paralympic Nationals this summer.

Ryan and Aaron and ABR are to thank for my active lifestyle and the level that I have been able to compete at. I look forward to representing the organization, and I hope to be able to make them proud. I also look forward to helping other amputees making the transition into running as a part of ABR.