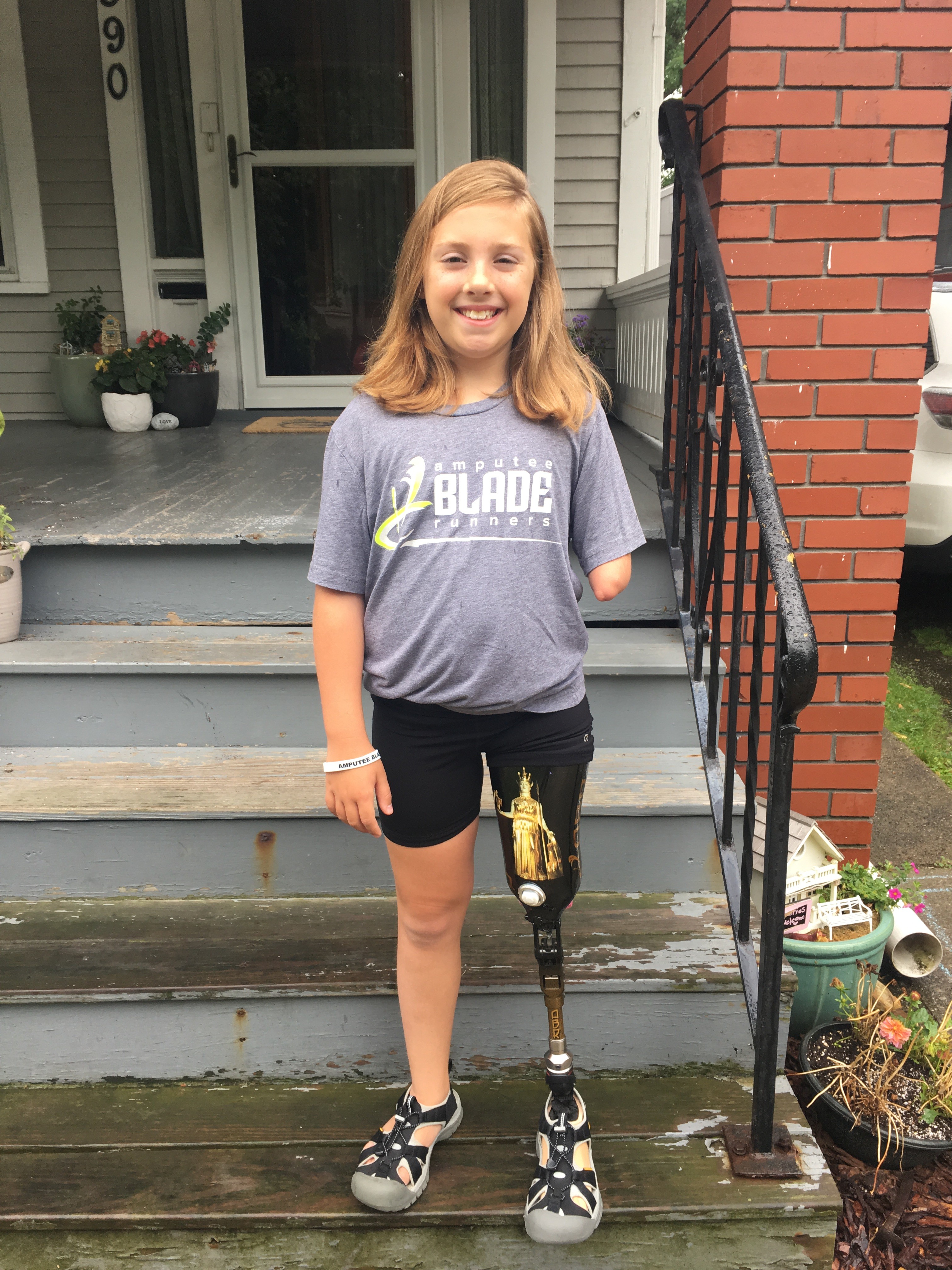 Serenity was born with a congenital limb deficiency affecting both limbs on her left side. Her arm goes just past her elbow, and her leg stops just above where a knee would grow. By the time she was six months old, Serenity had received her first prosthesis. She attended both physical and occupational therapy and was at our local children’s hospital at least three times a week. She also attended developmental play groups to encourage ‘typical’ walking patterns, we had home visits with therapists as well. In short, making sure Serenity could keep up with her peers became my full-time job.

By nine months old, she was starting to walk independently. Her first prosthesis had no knee, and strapped on with a waist belt. In the years that followed, we went through a few different prosthetists, as well as different styles of prosthetic legs. The common issue is that even though we tried different types of sockets, countless different styles of socks and gel liners, and different strap systems, they always seemed to limit her. There were issues with gel liners creating blisters on her legs that were painful, and would last for weeks at a time, if she was playing in water or got very sweaty in the summer, the liner would just slide off her and we’d be done wearing the leg for the day. Even as she got older, and we found better prosthetist’s who were willing to try different things for her, a leg that fit perfectly, wouldn’t fit three months later and became increasingly painful. I was giving my five-year-old Tylenol in the morning to tolerate wearing her leg at school. I just remember, after having to attend a birthday party without her leg, where she spent the afternoon perched on a chair because she was uncomfortable scooting around in front of so many new people, she told me she was tired of being “special” because it was just too hard. I smiled and promised the next leg would be better, but it wasn’t. We continued to cycle through the same problems. And we were told over and over that this is just how it was, and as an adult, when she quit growing, things would be better.

Even through all the struggles with her prosthetics, Serenity was a very active little girl. She has taken tap and ballet since she was three, she loves to swim and ride her scooter, she roller skates, ice skates, and loves to hike and be outside. We have never let her limb deficiency be an excuse for her, we have always told her she just may need to work a little harder. However, in first grade, something started to change. I got a note from her gym teacher that she was constantly without her gym shoes, and we discovered that she had hid them in the back of her closet. She said she hated that no matter how hard she tried, she was unable to keep up with her classmates. I was seeing my daughter starting to give up out of frustration, and I couldn’t let that happen.

I spent a lot of sleepless nights scouring the internet, and one night I came across the ABR website. I wound up calling the office the next day, explaining that my daughter wasn’t a competitive athlete, and I really didn’t think she’d be accepted into the program, but that I was just looking for some information. I was given the email address of cofounder Aaron Fitzsimmons, and I sent my questions and concerns to him, as a parent that was just looking for advice on what to do next. I was amazed at the amount of information he provided me with, and honestly at his level of interest. We exchanged a few emails over the next couple of months, and for the first time I started to think that maybe we didn’t have to wait until Serenity was an adult to find a leg that would keep up with her instead of holding her back.

In the early spring of 2017, when Serenity was seven years old, Aaron called me. I was in the middle of unloading groceries when I took the call but talked with him for nearly an hour. I told him I had a kid that was so frustrated that she didn’t want to try anymore, and I didn’t know if she’d be an athlete but I didn’t want her equipment to be the deciding factor. I get so emotional to this day, thinking about how that phone call was a turning point in not just Serenity’s life, but for our whole family. Talking to someone that was genuinely interested in improving the quality of life of a child they have never met is mind blowing. I feel that way about everyone at ABR, because they all give so much of themselves and are the most generous people I have ever met. Aaron assured me that my seven year-old didn’t need to be running marathons to be a part of this program, she just needed to want a more active life. It was only a few weeks later that our family was traveling to the ABR offices in Nashville, TN.

I feel like craziest part of this, is that Serenity never wanted a running blade. She is a child that is very apprehensive to change. She had seen pictures of the blades and was concerned that it would too weird, or that people would make fun of her. I have allowed her to make a lot of decisions about her body from the time she was old enough to talk, but I felt like this was a time when I had to push her. So, we went through the casting for the walking leg, and the test sockets, and we were all so excited about how well everything fit.

Coming there, Serenity had a gel liner with a strap that fed through and velcroed on the outside of her socket. She was unable to put it on by herself. Which really limited her independence, aside from all the issues with fit and comfort. The new socket was designed to her to bear her weight on the end of her leg, and was a suction fit. For the first time in her life, she could put her leg on independently, which was huge for her. From day one, it has been amazing, she has had no issues with pain or blisters, and that socket lasted nearly 2 years. Every other socket had started to fit poorly after only a couple of months. That alone was such an amazing gift for her. Then the day came when it was time to try the running blade. Even as Aaron was putting the final pieces together, she was whispering to me that she wasn’t going to like it, it was too big, too crazy looking. I told her to just put it on and try. She slipped on, stood up, bounced a little, and screamed the most amazing joyful little scream I have ever heard. She couldn’t stop bouncing and running and smiling. She had always tried to run before, but it wound up coming out as more of a gallop where her prosthetic kind of dragged behind her. Now she was really running, she ran down the hallway with Aaron and was literally the happiest I’ve ever seen in my life. The next morning, our family went to the park and I got to go for a real run for the first time with my daughter. As emotional as that trip was, I didn’t cry while we were there because for the first time in her life there was nothing to cry about.

We came from that trip with a very different little girl in the best way possible. She no longer cares what her leg looks like, she cares about what it can do, what it really allows her to do. Before going, she couldn’t even get half way through the mile in gym class. Just a week or so after returning, they did it again and she finished it in class!! It was such a huge moment for her. She still had to walk part of, but the fact that she could complete it made her feel like so much more was possible.

Since she has had the blade, she has a lot more energy, she loves gym class, and is so much more confident. It has drastically improved her quality of life, and as a parent I couldn’t ask for anything more than that. She has continued in dance, and loves her blade so much that wears it for tap and ballet. She completed a 5k run, and a one mile kids run, and while running on its own is not her favorite thing, she can do it. She is looking forward to her second trip to Nubabilty Sports Camp, and wants to work on her soccer skills and plans to play on her school’s team this fall. As a parent of a child with limb differences, I think the hardest thing is to not be able to provide something your child is in desperate need of. The people at Amputee Blade Runners have come alongside of our family and provided things for my daughter that I never could. And for us it isn’t just that they provided a leg or blade, they have given her the opportunity to truly live her life to the fullest and to know that she really is capable of anything she wants to achieve.