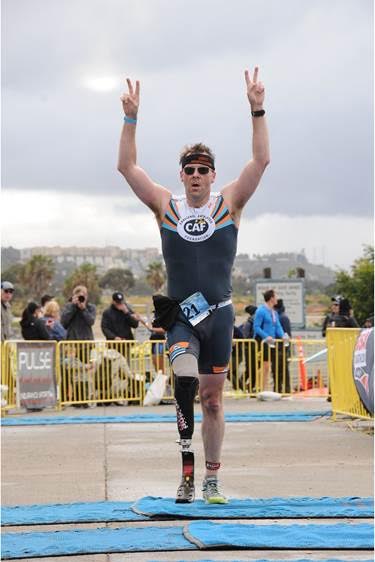 I lost my right foot below the knee in a boating accident when I was 10 years old. Following multiple surgeries, rehab and learning to walk again, I was back to playing sports the following summer. However, I was slow as dirt and had the mobility of a rock stuck in the mud. While I went on to play 4 years of high school baseball, I was constantly adapting my technique to make up for the lack of technology in prosthetics in the late 80′ and early 90’s.

My sports story starts following my career as a police officer and eventually graduating law school and becoming an attorney. In 2013, I completed my first triathlon, a sprint distance race hosted by my local city. While I finished 3rd from last, I knew I could do better, if I had the right tools, i.e. leg! I began researching running blades and sports prosthesis and discovered a whole world of opportunities existed. I was fit with my running blade from a local prosthetist and became involved with Amputee Blade Runners, as I recognized the immediate benefit proper sports prosthesis could provide to old and young alike.

I contacted ABR about becoming an ambassador to spread information and inspiration for all amputees that desire higher activity levels. ABR swapped my running blade out for one set for my reduced weight, and built me a hybrid bike/walk leg. The hybrid leg is perfect for social group and coffee rides, and for sprint distance triathlons. This particular tool allows me to keep up with my group on the bike and walk in the coffee shop afterwards. Not having to carry spare legs to change out makes my sports and social life much more enjoyable.

I was honored and humbled by the attention and information that ABR was able and willing to provide. Since my involvement with them, I have participated in a half marathon in Nashville, completed the Ragnar Relay with a team of fellow amputees three times, and have completed several half and full iron distance triathlons. I am asked sometimes, what a running or sports leg means to me, and I share the following story.

While training for my first marathon, shortly after getting my running prosthesis, I was in Denver Colorado. I had completed a 3 mile easy run, and decided to do city block intervals. (This was my third time running with my running leg.) There I was running a city block and walking a city block in downtown Denver. During the running sessions, I was like an Olympic sprinter (in my mind), I know in reality I did not have the body of an Olympic runner, but in my mind I was. What was most powerful and most impactful for me, was when I realized that WAS THE FIRST TIME IN 28 YEARS that I was running as fast as my body would go, I was not being held back by a walking leg or by my prosthetic. It was in that moment, that instant, that sense of self realization that I realized how much I had missed out on. 28 years of my life, teenage years, young adult years, college years, I could not RUN. Yes I could sort of run in a forward hobbling motion with some coordination, but not RUN. I don’t want any person of any age to ever miss 28 years of opportunity to RUN because they simply do not have the right tool, or leg.