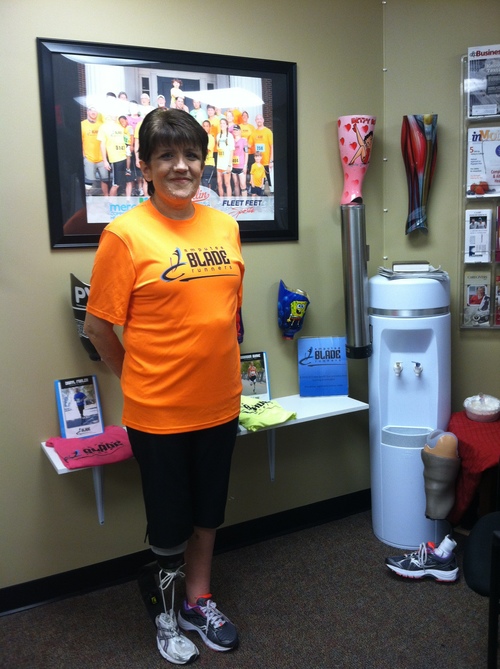 I was born with a disease called neurofibromatosis. With this it brought many surgeries, more than I can count or even know about. When I was older they realized my left leg was shorter than my right leg. So, I was fitted with a significant lift on the left foot and a clunky brace on my right leg. I also had a surgery where they scraped my growth plate so my left leg would catch up to the length of my right leg.

I was always told I would probably never be able to run and jump or participate in sports in fear that I might injure myself. I had PE class, and my teachers would tell myself and my parents I was lazy, when I was simply unable to do the things others were able to do. So I just gave up even though deep down I found myself envious and wondering if there was a way I could run and jump more like others.

Eventually I got married. I thank God he blessed me with a very supportive husband. To make a long story short I made the decision to have my right leg amputated below the knee. I figured anything had to be better than what I was living with. I was fitted with what I thought was a very nice below the knee prosthetic leg. I was able to have a much better quality of life. The only problem was that I was still unable to be very active. Earlier this year in 2013 I was talking with my aunt and sharing the dreams I kept having about myself running. She mentioned there had to be people or places out there that could help people with their dreams. So with a quick Internet search I came across Amputee  Blade Runners. I immediately called and filled out the application. I was so excited that day I got a call from Brandon Burke saying I had been accepted to be fitted for a running prosthesis.

So that brings me to today. I have met so many really awesome people. Aaron Fitzsimmons and his charity are amazing. I have learned more and been able to do more as an amputee in the short time of 1 week I have been in his care than I have in the previous 18 years as an amputee. I have been given the equipment to be more active and I am running now. I know it will only get better and I will run faster and further as my training progresses.  God bless you Aaron and your wisdom mission. I could not feel more been blessed and proud to be a part of this. I know God put you and your charity in my life and I can’t wait to see where this takes me.