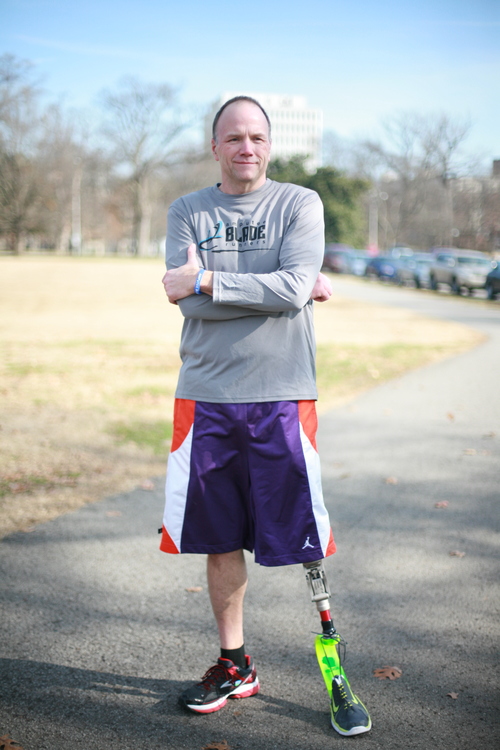 I’ve been an amputee for 40 years, having lost my leg in a farm accident when I was ten years old.  Growing up and making due with legs that wouldn’t allow me to run was my biggest challenge, but I made due the best I could.  I had always played sports, and downhill skied on one leg, but during the past seven or eight years I really started pushing myself to do more.  I started lifting weights and walking on the treadmill, eventually moved to doing the elliptical and even completed ten weeks of the “Insanity” workout, just to get in shape and prove I could do it.    Over the past four years I have also participated in local 5k events in my hometown.  It was after my first 5k that I really started looking for a way to get a running leg.  After hearing about the cost involved, and knowing my insurance company would never pay toward one, I figured my days of running had past me by.  Then after years of mentioning about running to my prosthetist, he told me about “amputee blade runners.”

After filling out the application and sending it in, I was totally elated when I got the phone call saying I had been accepted for the grant.

Right from the beginning my experience was nothing short of life changing.  Everyone at ABR was awesome to work and learn from.  It was a shock to find out that the legs I had used in the past were not made for people who are active, and how the skin fit socket and running blade could give me another chance to accomplish my dream of running.  I was included in every aspect of the leg building process, from video taping them build my socket, to putting the knee and running blade on.  Everything was explained in detail, and they made sure I new how to care for and even make repairs if needed down the road.

The biggest impact I felt was when I ran my first mile in nearly 40 years on my new leg.  I had the support of ABR staff running every step of the way with me, encouraging me not to give up.  I would also say the feeling of family comes through with this organization also, especially watching the way they take in and care for the needs of younger amputees.

After being unable to run for nearly forty years, I feel like I am getting my life back.  I have the capability to play running sports with friends and family, and run instead of walk 5k events back home.  More importantly I have the chance to be a total person again, and hopefully be an inspiration to others young and old.

My goals with this new leg are in the short term to become a confident runner who can participate in 5k events.  Eventually a goal of mine is to win my age group in 5k events, and to be able to play full court basketball, as well as participate in other summer sports.

Words can’t express my gratitude toward the way AmputeeBladeRunners.com changed my life!  Now it’s up to me to pay it forward.