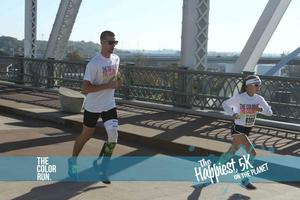 I lost my left foot at the age of 3. My parents quickly realized that this wasn’t as much of setback in my life as they anticipated. Pee Wee football began at the age of 5 for me, and every other sport you can think of followed. Growing up, I was always active and competitive. My only setback was that my prosthesis would break on me quite often due to the extreme forces I put it through. I remember being frustrated with this at times, but basically accepted it as normal issues.

As I graduated high school, I was fortunate enough to be selected to play in the 2002 Tennessee East/West Football All-star game. This led to an interview with ESPN. After the interview aired, I was contacted by a US Paralympic Track coach. He thought I would be great at running track and starting speaking about getting me a “running leg.” I remember thinking, “what the heck is he talking about because I could run just fine in my normal leg?” Little did I know about the technology available for amputees and how much it could help. A running prosthesis was donated to me, and the first time running on it felt simply amazing. My first 2 accomplishments were improving my mile run time by 45 seconds (just under 6 minutes) and improving my 40 yard dash time from 5.1 seconds to 4.8 seconds. This was accomplished without any training!

I went on to compete for the US Paralympic Track and Field team from 2003 to 2008. It was such a great experience that I am thankful for every day of my life. Now I compete in 5k, 10k, half marathons, and triathlon races. This is mainly to stay in shape and to promote awareness about what individuals with disability can achieve with the right mindset and technology. To me, ABR isn’t just about running. It’s about opportunity and achievement.