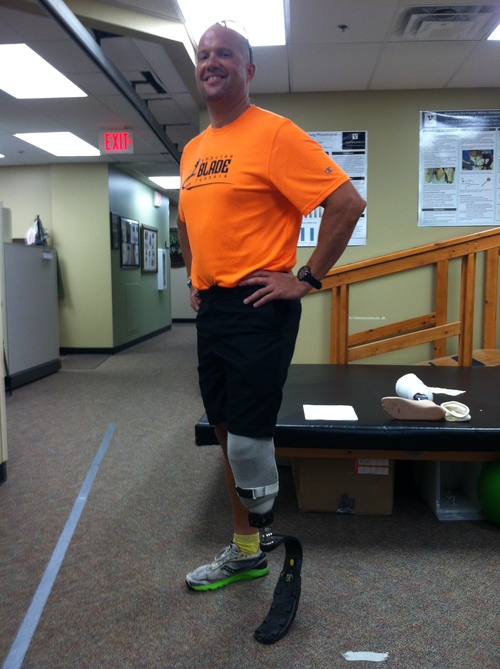 Travis joined ABR in September of 2013. He lost his left leg below the knee in 2011 from an infection that had gotten into his bone in 2010. Travis’s leg was so badly infected that the bone snapped one morning as he was getting out of bed. After having the infected leg removed, he was determined to achieve his running and cycling goals. There was no way he was going to allow losing a leg hinder him from having a full life. Travis received a running prosthesis from a prosthetic company that he tried to run on for 2 years. This prosthesis gave him open sores on his stump every time he ran any further than ½ mile. He was told he would need to toughen up and get used to this. Travis got frustrated and assumed this was the best technology out there.

Travis met Aaron Fitzsimmon’s father during a road cycling race event and learned that not all running legs are made the same and that the most critical piece of the prosthesis is the socket that fits the limb. He learned that the fit of the socket is the key, and no piece of technology will make an improper socket fit better. Travis received a running leg and was back running without pain or problems. Travis had goals beyond running and is a great cycler. Amputee Blade Runners made Travis a new walking socket and a specialized cycling leg with a custom made cycling foot! Travis was unable to stand up while riding his bike until he got the specialized cycling foot. Travis improved his average speed from 16 mph to 20 mph immediately with new cycling prosthesis! Travis competed in 3 cycling events and a 5k in the first month and plans to participate in some 1/2 and full marathons in the future, and he isn’t even considering slowing down! According to Travis, he is just getting started.