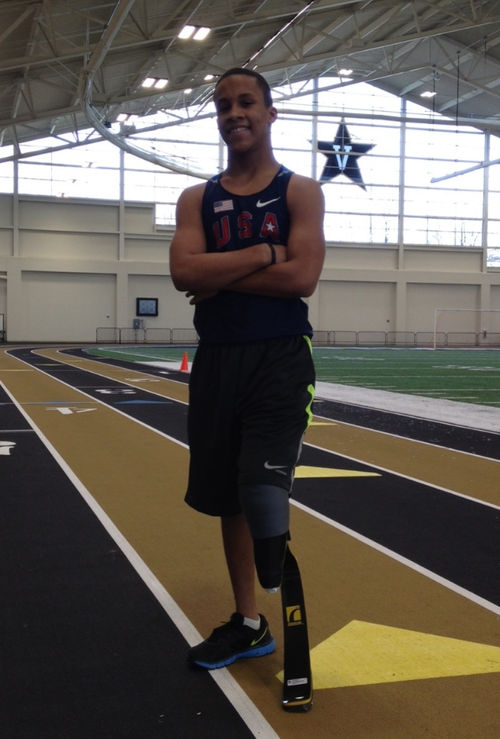 Andrew is 14 years old. He was born with Amniotic Band Syndrome, which resulted in the congenital loss of his left leg below the knee, a right club foot, as well as affecting the fingers on both hands. He has undergone 7 surgeries since birth, none of which have stopped him from accomplishing anything that he wants!

Andrew received his first prosthetic when he was about 18 months old, when he was a patient at the Shriner’s Hospital in Lexington, KY. He has always been very active in sports and has played football, basketball, and baseball since the age of 5. He currently plays football and basketball on the middle school teams at his school, Mt. Juliet Christian Academy. He has since given up baseball to devote his time to train for the track season and compete in the UCO Endeavor Games in Edmond, OK in June.

It wasn’t until Andrew met Ryan Fann in October 2011 that he was inspired to run. Prior to this, Andrew had never even known this was an option. Ryan introduced him to all of the possibilities and made his first running blade. Thanks to Ryan and everyone at Amputee Blade Runners, he has increased his speed and is able to train harder. The sport specific prosthesis’ that Andrew has received through ABR has not only helped with running but has also improved his performance tremendously in football and basketball as well. Andrew went to the 2012 Endeavor Games and won 4 gold medals and broke all 4 records in the process. And he doesn’t intend to stop there! He had to sit out the 2013 Endeavor Games due to an ACL/MCL spring football injury, but he is ready to go for 2014!  With the new running blades and new opportunities that ABR keeps opening up for him, the possibilities are endless!

Andrew’s short-term goal is to go to the UCO Endeavor Games and bring home the GOLD and break all records possible! Some long-term goals are to play college football at Vanderbilt University and eventually make it to the NFL! The biggest inspiration in Andrew’s life is his dad, Mike Kittrell, who has also been his coach for every sport that he has ever played. Mike has always instilled the belief in Andrew that he is no different from anyone else and he can do whatever he sets his mind to… and when you see him on the field, the basketball court or the track, you will quickly realize that he holds nothing back!

Andrew was awarded the Kaia Jergenson Courage Award from the Nashville Sports Council in March 2013. He is involved in various community service projects with his school and with ABR. He is also involved with the youth group at First Baptist Church in Mt. Juliet and in mission trips with his school.

Philippians 4:13 tells us that Nothing is Impossible. I am thankful for the abilities that God gave me and for the support from my family and friends. My goal is to play college football at Vanderbilt University and go on to play in the NFL and I AM going to be a Paralympic Gold Medalist. Just because you think you have a disability, NEVER GIVE UP! “For I know the plans I have for you,” says the LORD in Jeremiah 29:11. My name is Andrew Jeremiah Kittrell and that’s my story.