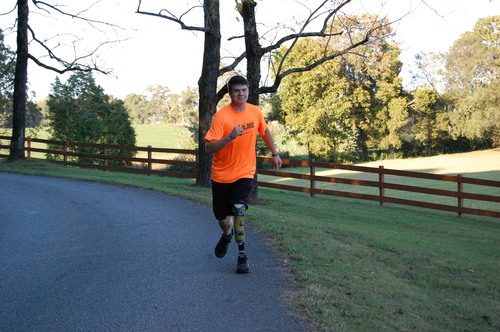 People call me “DJ” and I was born in Bradenton, Florida in October 1997. I had a birth defect known as fibular hemimelia, which required amputation of my left foot when I was nine months old. I got my first prosthesis when I was ten months old and started walking unassisted a few months later. There was no stopping me!

I LOVE SPORTS! I became interested in baseball and have played steadily since I was six years old. Dixie Youth Coaches have told my parents through the years that I was a first round draft pick when they would pick for teams. I pitch, catch, play shortstop, third and first base, and sometimes play in the outfield. Last year as a freshman, I started most of the games, either on third base, in the outfield or pitching.

In the past, I competed locally in the MLB Pitch, Hit & Run and came in first. I then went to regionals and came in second overall. In 6th grade I participated in the 5K Jingle Bell Run in Knoxville, where I was the second on my team to cross the finish line. After joining the Amputee Blade Runners in 2013, I ran in the Mercy Hospital 5K in Franklin and the Fire Fighters 5K in Sweetwater. I really enjoy running in the 5Ks and hope to keep improving my times.

During Junior High I played basketball. I started all Junior Varsity games, and got to start in quite a few varsity games. This school year I plan to try out for the high school basketball team.

I love playing sports. I play with my heart and to the best of my ability to help my team. My coaches tell me that I amaze them by how well I play, and also they tell me they appreciate how dedicated I am to my team and the sport. I am also an honor student and take honors classes – honors biology, algebra, geometry, chemistry, english and world history. I am active in FFA and competed in FFA Creed Speaking contests, making it all the way to the regional competition. After college, my dream is to play either professional baseball or football. My favorite college team is the Florida Gators, and one of my heroes is Tim Tebow!

I enjoy giving back to my community by helping umpire at little league baseball games and being part of the chain gang at local little league football games. I often volunteer to help at youth sports activities, hoping I can inspire the young players.

My motto: STAND TALL, BE PROUD, INSPIRE OTHERS!