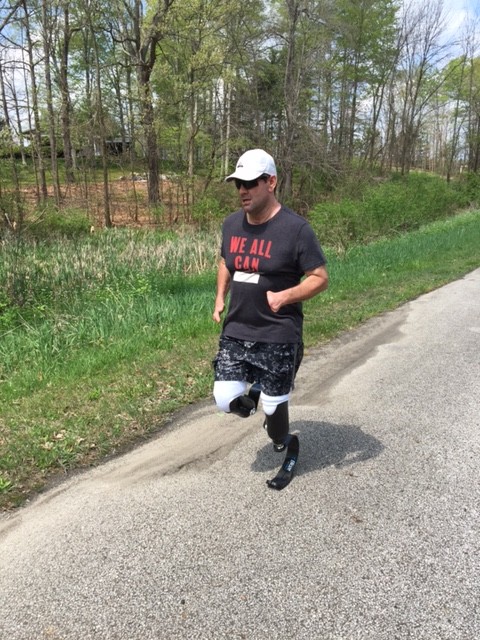 My name is Jeff Belcher and I live in the small town of Hudson, Ohio which is thirty miles south of Cleveland…home of the NBA Champions, Cleveland Cavaliers! I grew up in the Connecticut and was involved in many sports as a child. I was offered an athletic scholarship to play tennis at Old Dominion University. After graduation, I would soon start my career in tennis.Teaching tennis with my wife for over twenty years as a Director of Tennis would be one of the greatest experiences of my life.

In the early spring of 2013, life went sideways and I went from my athletic tennis self on a Friday to the following Monday, where I would be on life support. My family was told that I had 5% chance of survival as I was diagnosed with a Thyroid Storm, the odds were definitely not in my favor. After being in a coma for two months, having organ failure, on life support, and spending time on an ECMO machine, surviving all of that was just the beginning. I was at the Cleveland Clinic for six months which included my time in and out of surgeries, going back and forth to rehabilitation hospitals. All in all, having more than 50 surgeries where I eventually lost both my legs below my knees, all of my fingers on my left hand and on my right hand, all that remains are just two partial digits. Today, I’m most proud of my wife, Lora, and my two kids for being there for me unconditionally. For the past three and a half years, I’ve quietly began putting the pieces of my life back together in finding my new life being an amputee and just recently connected with the people at ABR.

Amputee Blade Runners have given me a new lease on life.  In early February 2017, I received my Fillauer Sports Feet and Blaze Running Blades. Before receiving these prosthetics, I was wearing Ossur Vari-Flex for four years, which allowed me to be active, but nowhere near what the Fillauer prosthetics are capable of providing. Nowadays I find myself doing things I once did, playing basketball with my kids, doing yard work, going for long walks with my wife. My new prosthetics have given me more independence which is important to any amputee. As a former athlete, I was used to running around a lot. Now with my blades, I can achieve that feeling once again.  Working with ABR has been such a positive experience, from day one. The process from the fitting to the final small adjustments were amazing and I would encourage anyone to be a part of. Where my prior experience had taken months to finish, ABR does it in days and weeks.  I had applied to ABR because there are very few organizations out there dedicated to athletic prosthetics and that was my focus from the beginning as I was trying to find a way to be my old self, running around with my kids, doing the activities I once used to do. Being a more active amputee has nothing but upside to it. You WILL feel better mentally and physically.  Thanks ABR!